Bring your frame window a shadow 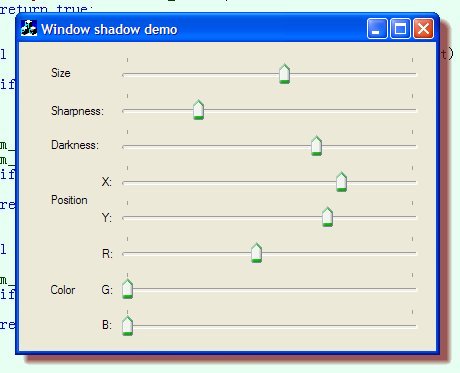 On the upcoming Windows Vista, each frame window has a cool shadow by default. Microsoft recently released the new Windows Live Messenger, which has an option to make frame windows of it shadowed. This strongly indicates that there is some way to bring shadows to application windows on operation systems other than Windows Vista. In this article, we try to accomplish this in a way similar to what WLM does.

When I came up with such a problem, the first thing I did was search the web to see if someone had already done it. Unfortunately, almost all of what I have found -- some of which is on CodeProject -- is on how to make child windows shadowed, such as controls. The main idea is to draw the shadow on the parent window. The key point, however, is that if you want to make a topmost window a shadow, the shadow should be drawn on areas that do not belong to your application. Drawing on other applications' windows may mess up their screen display. Even worse, what if those windows are changed or moved?

Then I found this article written in Chinese, which suggested an excellent way to solve the drawing issue. The author created three small child windows for the frame window: on the right side, the bottom side, and the bottom-right corner each, to draw the shadow on. The shadow is drawn with alpha blending on the image of the underlying windows. When the frame window is moved or resized, the child shadow windows are also moved or resized and repainted.

However, this solution has two main shortcomings:

Then, fortunately, I found that the layered windows supported from Windows 2000 can solve both of the above problems. Layered windows can be "transparent" to mouse actions and can be automatically alpha blended with the actual image of the underlying windows. It is even easier than the method mentioned above, for you don't actually have to worry about how to draw alpha blended. You only have to set the color -- pre-multiplied, of course -- and the alpha value for each pixel.

With those enlightenments, I observed the WLM window using Spy++. I found that this is the very method that WML uses to make its windows shadowed. There is a layered window with the class name SysShadow for each shadowed window of WML. SysShadow is actually provided by the Windows system to make certain windows shadowed, such as menus. It is easy to utilize your frame window with a SysShadow shadow window by adding a CS_DROPSHADOW class style to the window class. Again, however, this solution has two shortcomings:

As a result, I decided to write my own code.

It is easy to utilize your frame window with a shadow using my code. CWndShadow can be used in both MFC/ATL and non-MFC/ATL applications.

Now your frame window should have the shadow. Enjoy.

On Windows Vista, frame windows shall already have a drop shadow when Aero is enabled or, to be more precise, when the desktop composition is enabled. The desktop composition is responsible for several Vista visual effects. This includes, but is not limited to: the glass window frame -- either translucent or opaque -- the aurora and the drop shadow. When there is already a shadow, my shadow is expected to be hidden. So, I make the shadow Aero aware with the help of the DwmIsCompositionEnabled() API and the WM_DWMCOMPOSITIONCHANGED window message. When Vista Aero is enabled, the shadow of my code will be disabled automatically.

Advanced control of the shadow

Some parameters can be set to control the appearance of the shadow. Here is a full list of them. I have to stress that the ranges of these parameters have not been critically tested. The shadow may not function well if they are not set around "regular" values.

Sets the color of the shadow.

Sets the sharpness value, which controls the width of the gradient translucent areas around the border of the shadow. If this is set to 0, then the shadow will have the sharpest border.

sets the darkness of the shadow. The greater this value is, the darker the shadow is.

My code was originally written within Visual C++ 2005. When I tried to test it in Visual C++ 6.0, I met several problems. Most of them were because of the old version of the Platform SDK shipped with VC++ 6, and some because of its incompatibility with the C++ standard. As the latest version of SDK I downloaded from Microsoft does not support VC++ 6, I decided to modify the original code to make it work in VC6. The two main points are as follows:

My code also involves some Vista-specific APIs and window messages to make my code Aero awareness. This unfortunately requires the Vista SDK installed to compile. Even worse, if these APIs are hard coded in the code, the application will crash on Windows versions prior to Vista. So, I also use the trick similar to point 1 above to integrate these Vista stuffs into my code.

It seems to be difficult to simulate the window shadow in Windows Vista using the current CWndShadow. There are two main reasons:

I'm considering adding support for a non-gradient border function and both of those two shadow models in future versions of CWndShadow.

The CWndShadow may be used and the source code may be redistributed unmodified by any means PROVIDING it is NOT used in commercial software/shareware or sold for profit without the author's expressed written consent, and, if the source files are distributed, providing that the notice and the author's name and all copyright notices remain intact. The CWndShadow is by no means to be included as part of any third party components library, or as part any development solution that offers MFC extensions that are sold for profit.

If CWndShadow is used in any commercial applications then a statement along the lines of:
"Portions Copyright (c) 2006-2007 Mingliang Zhu" must be included in the "Startup Banner", "About Box" or "Printed Documentation".

The article is also published on the CodeProject, where a discussion board can be found.

Questions and feedbacks can be also send to developer#mingliang.org, where the '#' should be replaced by the 'AT' character.