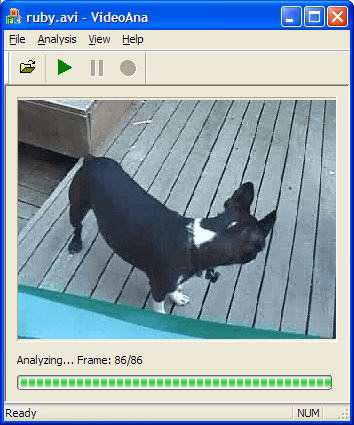 I recently came upon the task of processing video clips and extracting some features for further analysis. The basic idea was straightforward: just extract each frame of the video into a bitmap and then do whatever I wish to. I did not want to be stuck in the hardness of video decoding. I just wanted to use an existing and easy-to-use framework to extract the frames. That's when DirectShow, the widely used framework, came under consideration.

I searched the web for some solutions and I did find some. Unfortunately, what I found were mostly focused on just grabbing a single frame. This was far from efficient for my task. The typical extraction speed for such methods are around 5 to 8 frames per sec on my machine, which will be further discussed about later in this article. Keep in mind that the typical playback rate of a video is 25 frames per second! Thus, I had to dig into the DirectShow framework and write something myself. Fortunately, I ultimately achieved a speed above 300 frames per second on the DirectShow sample video ruby.avi, which is a bit small in frame sample image size and not deeply compressed :-).

Here are the approaches I found that could -- or are supposed to -- finish the task.

Maybe this is the most easy to use solution. There is an article that demonstrates this, which is unluckily written in Chinese. Readers of my article will probably not understand that one. The main idea of this approach is:

Perhaps this is the simplest way to enumerate all of the frames of a video file. Unfortunately, its performance is not satisfying, as I mentioned before.

There is a good article demonstrating this approach. It is not much more difficult to use than using IMediaDet, but its performance is also not much better. The advantages of using this over IMediaDet are:

So, this is suitable for just getting some snapshots from the video.

By writing your own transform filter, you can just do your job inside the DirectShow framework. This approach is the most powerful and efficient one. On the other hand, you need to know DirectShow quite well to get it work. It is also quite difficult to realize a transform filter. There are several MSDN articles explaining how to write a transform filter, as well as an example realizing a sample grabber trans-in-place filter. Note that the demonstrated sample grabber here is quite like ISampleGrabber, working in callback mode and not in one-shot mode. This seems too difficult for me, however, and there appears to be too many things to consider for I'm just a green hand at DirectShow. In the end, I decided not to use this.

As far as I know, there is another widely used framework that may complete my task: OpenCV. OpenCV is a well known open-source and cross-platform computer vision library, of which video tasks are merely a small part. I just came up with some build problems with it initially, but maybe I should look into it later.

At last, I chose ISampleGrabber in callback mode and not in one-shot mode. That is, I run the DirectShow graph and it continuously decodes the video frames of a video file. Each time a frame is decoded, a user-defined callback is called by DirectShow, providing the image data. The analyzing work can be done here.

Setup of the graph

The video analyzing framework should contain extra components, so the DirectShow graph for analyzing goes like this: A ISampleGrabber is added right after the source filter, which does the decoding work. ISampleGrabber is followed by a NullRenderer, which simply does no further rendering work. The most commonly used code to connect filters that I found on the Internet looks like this:

For some video files, though, the line pGraph->Connect(pOut, pIn) just failed. I checked and found that the source filter for such video files has more than one output pin and GetPin() just returns the first one. The returned output pin may not be the one that outputs video frame data. So, I modified that code to make it work on all video files supported by DirectShow:

However, if we were to incorrectly open an audio file such as an MP3, the above would be blocked and ConnectFilters() would never return. I don't know how to avoid this :-(.

About the demo project

The demo project I provided is in VS8.0 (VS2005) format. The DirectShow SDK is now included in the Platform SDK, which used to be included in the DirectX SDK. The Platform SDK I downloaded from Microsoft does not support VS6.0 any longer (refer to this), so I was not able to provide a version on VS6.0. I also do not have a VS7.x installed on my system, so there's no VS 7.x version either. However, if you create a proper project in VS7.x and copy all of the code in my project to it, it should work.

The article is also published on the CodeProject, where a discussion board can be found.

Questions and feedbacks can be also send to developer#mingliang.org, where the '#' should be replaced by the 'AT' character.